This was my first time at the Whiskey 50 and aside from a cold rainy weekend it was an excellent race.  I drove down to Prescott on Friday, got some riding in, checked out Whiskey Row, watched the pro fat tire crit and later settled into my hotel.  I was planning on camping but after watching the weather report all week it didn’t look very good for camping so a hotel seemed the much drier, warmer option.

After getting a pretty good night’s sleep I ate a good breakfast and headed down to the start.  When I arrived at the start line 20 minutes early it was already packed and I was thinking to myself that this was going to be a long day trying to pass 500 people.  It wasn’t but a couple of minutes later I noticed some guys hopping the start barriers to get in with a faster group of guys.  I didn’t see anyone complain about it so I did the same thing and felt much better that I would be starting in 100th or so position versus 500th.  Finally we started and the mass of 600+ riders was on its way.  The pace starting out was fairly manageable until we hit the dirt and then it was on.  I settled in around 15th place heading into the single track and felt good all the way to the top of the climb before heading into Skull Valley.  On the way down to Skull Valley I got a slow leak in my rear tire that wouldn’t seal up so after the turn around I had to hit it with a CO2.  I was hoping that it might finally seal up but it didn’t so I had to hit it with C02 two more times up the climb.  Finally after getting on the single track at the top of the climb I settled in for that last 8 or so miles back to town.  Fortunately I didn’t have to air up my tire anymore and was able to finish in 7th place in the 45+ category.  Overall I had a great race and I’m already thinking of going back next year.

Later on Sunday after I got back I took my tire off to the check the sealant and it was all dried up (sheepish grin).  Note to self, next Whiskey 50 that you race, especially one that is sponsored by Stan’s, make sure you actually have liquid sealant in your tire.  The dried up sealant apparently doesn’t do that much good (another sheepish grin). 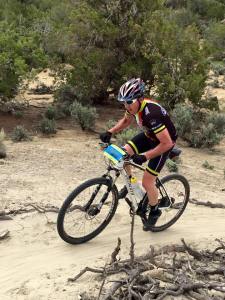 I always try to do the Alien Run in Aztec, NM as it is always a fun race and there is usually a number of locals that do it as well plus it is close.  All of the other races I’ve done this year, except for the Squawker Classic, have been 7 hour drives.  This year the race had a number of fast locals and the pace started out very fast.  It wasn’t long before I was a little ways off the back and had to admit that some days you’ve got it and some days you don’t so I settled in at my own pace and managed to pass a few a guys before the finish.  In the end I finished 12th overall and 3rd in the 45+.

Use BikeReg.com for your cycling event!